Made in Currituck - The Kill Devil Diesel Story

Made in Currituck: Kill Devil Diesel 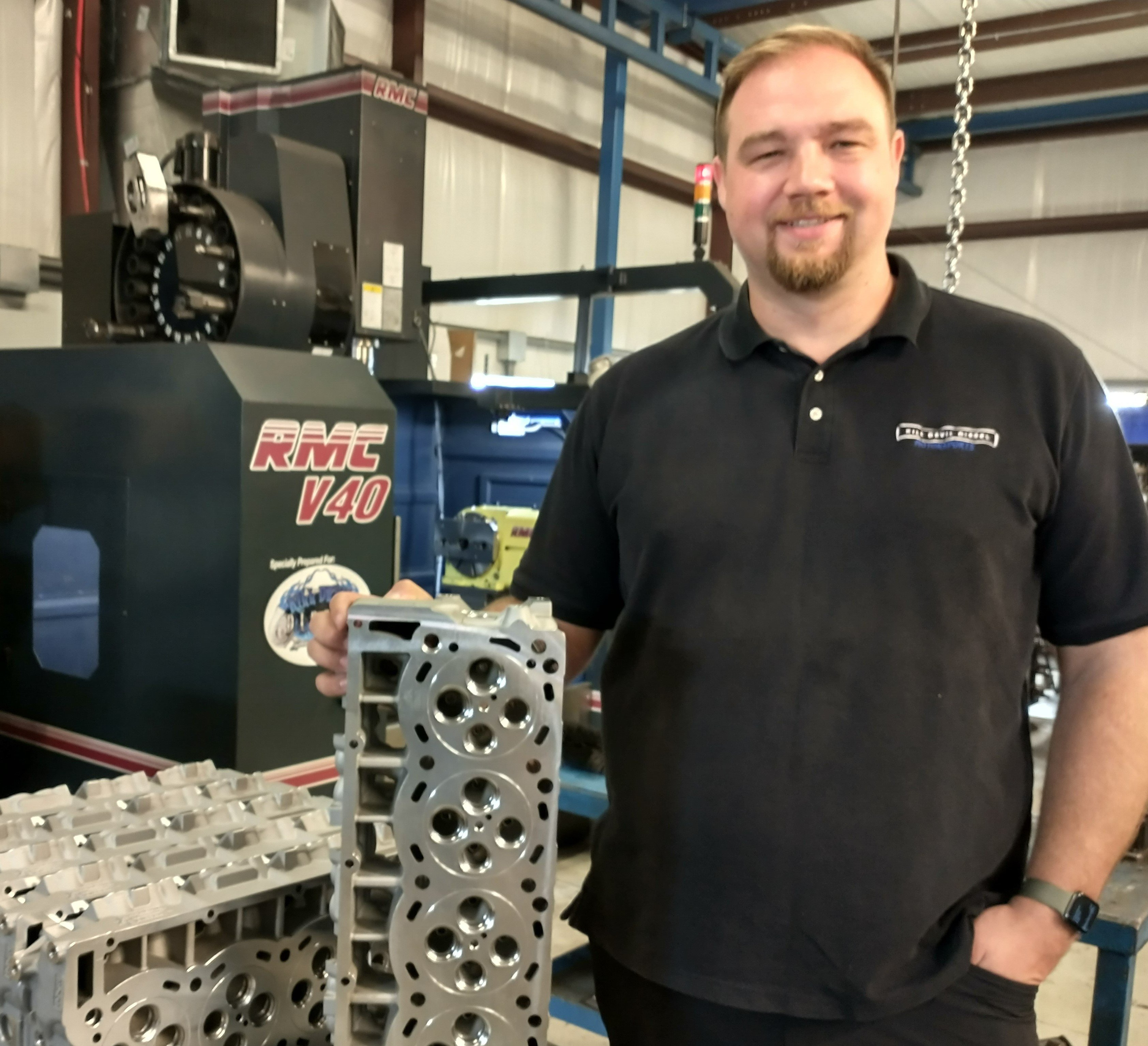 Jared Alderson, founder of Kill Devil Diesel and some of the company's exclusive aluminum cylinder heads.
In 2006, a 19-year-old Jared Alderson stood in line for about a half hour to chat with Dennis Anderson, driver of the world-famous monster truck known as Grave Digger.
The conversation changed his life.
Anderson had just won the Monster Jam World Finals in Las Vegas. Alderson flew there from his Chesapeake home for the event after scraping together enough money from a part-time job at an auto parts store while studying engineering at George Mason University.
Anderson offered him a job on the spot and Alderson accepted.
For the next 11 years he would work for Anderson and within the monster truck industry learning about engines and establishing contacts.
As a result, Alderson founded Kill Devil Diesel in 2017, a company with 16 employees that remanufactures and makes components for diesel truck engines. They work from a 7,500 square-foot shop set behind Digger’s Dungeon in Poplar Branch.
The company annually remanufactures 200 to 300 engines improving durability, speed and capacity up to 2,000 horsepower. Trucks become better at pulling weight or running faster on the racetrack.
Engine Builder Magazine named Kill Devil Diesel national builder of the year in 2019.
It all began with Anderson’s job offer.

Anderson was impressed with the young man’s calm demeanor and mechanical expertise.
“I could tell right away that he was a guy that could really help us out,” Anderson said in a phone interview.
Alderson started working weekends at a venue located near Diggers Dungeon in Jarvisburg that would become Anderson’s Muddy Motorsports Park. Anderson needed laborers to put in fence posts, set up facilities, erect bleachers and work on the grounds.
Muscular and standing seven feet tall, Alderson could handle a heavy workload and loved big trucks since going to events with his father and grandfather in his boyhood.
His grandfather taught him all about engines, how to take them apart and put them back together again. They would go to car salvage yards together and pull parts so his grandfather could show him what they were for and how they worked.
Alderson eventually became an inspector at Muddy Motorsports Park where he ensured contestants entered the correct race classes, were safely operating and following the rules.
Over the years working for Anderson, he learned from the master showman about motorsports entertainment.
“Racing is great, but without fans there can be no race,” Alderson said in an interview from his office at Digger’s Dungeon compound.
RELATED READ:
Dennis Anderson and 40 Years of Grave Digger
Meanwhile, Alderson left his auto parts job to work at a machine shop in Norfolk and continued to work weekends at the motorsports park.
After a few years, he was offered a job building engines at the Monster Jam shop located behind Digger’s Dungeon. Now he was working for Feld Entertainment which owns the Monster Jam racing circuit, Disney on Ice, and Marvel Universe Live! among other live shows.
Grave Digger runs in the Monster Jam circuit with some 70 trucks.
It was a dream job for Alderson where he learned from Richard Midgette, one of the best engine builders in the business.
He was often called upon to travel to races with the monster truck team. On one occasion, Alderson was in the stands watching a monster truck race where he saw a happy young boy sitting near him enthralled with the show.
He realized how amazing it was to be part of something this big.
“I used to be that 5-year-old boy,” he said.
As time passed, Alderson began working on diesel engines in the evenings after his day job. The workload grew to where he could start his own business with Anderson’s blessing.
Alderson, a 34-year-old married father of two, called his company Kill Devil Diesel because of its proximity to Kill Devil Hills on the Outer Banks. 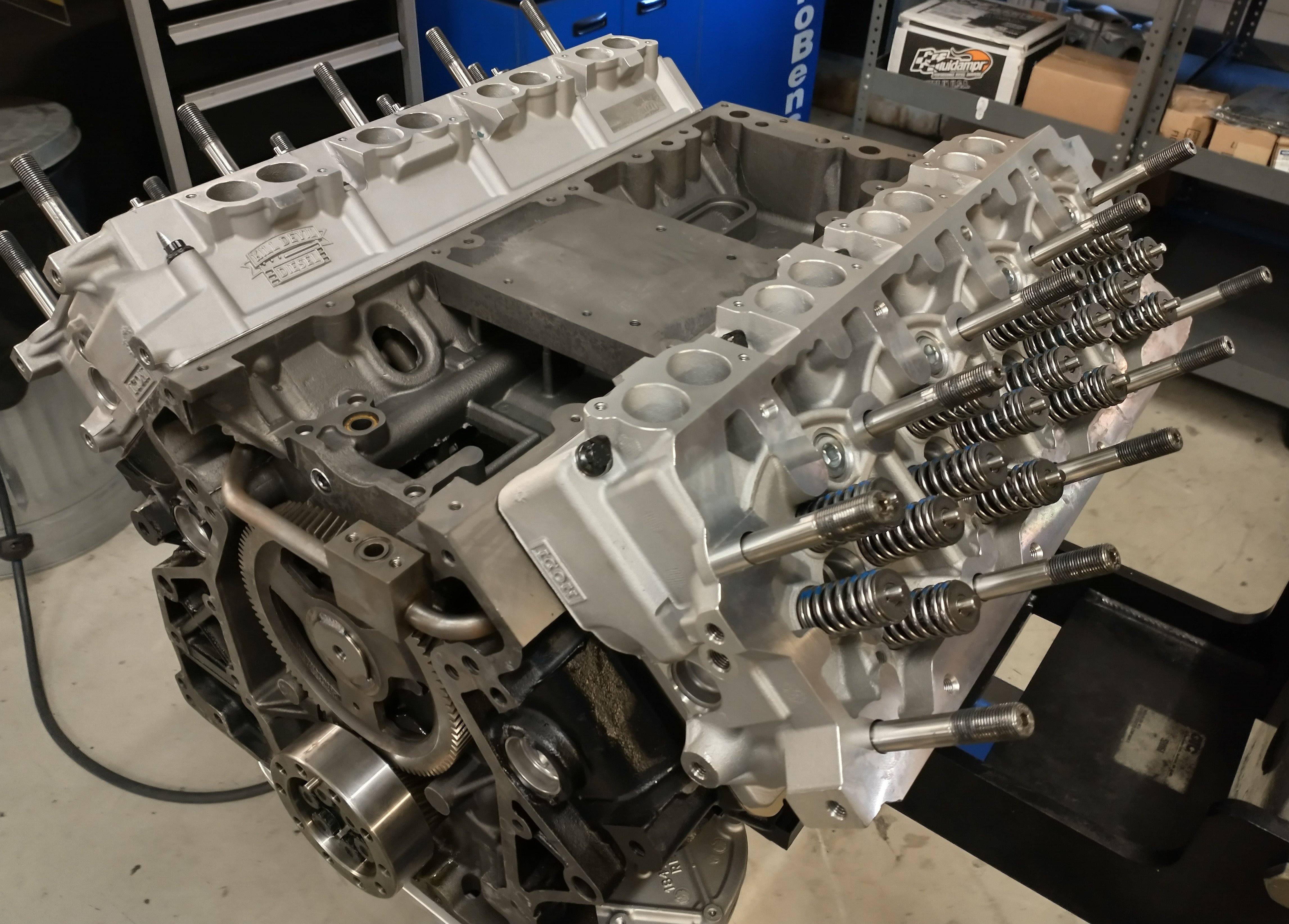 A remanufactured engine is nearly ready for shipping.
One of the company’s most popular products is custom designed aluminum cylinder heads. They sell about 2,500 annually. Factory-made heads are typically made of iron. The proprietary aluminum cylinder head is more durable, lighter and creates better air flow.
Diesel racing champion Charlie Keeter of Franklin, Va. was an early customer. Keeter won the 2016 and the 2017 Diesel Power Challenge at the Bandimere Speedway in Colorado driving a 2004 Ford F-250 pickup. Alderson and Kill Devil Diesel built his engine. The Diesel Power Challenge is the premier competition for performance-modified, street-driven trucks.
The 6.0 liter engine was not known for high speeds and performance, but “Six Liter” Charlie Keeter could run a quarter mile in under 10 seconds at speeds exceeding 130 miles per hour.
“For a six liter to run like that was unheard of,” said Alderson. “They are faster than Corvettes or Camaros. It was a feather in our cap.”
RELATED READ:
Made in NC: Quality Machine & Fabrication
Another customer that has generated business and attention for the business is K.C. Turbos out of Phoenix, Arizona, a company that specializes in customizing Ford Powerstroke engines. Alderson makes many one-of-a-kind parts for them.
The great improvements in diesel engines began in part with sled pulling competitions in the mid-1990s, according to Motortrendmagazine online.
Tractors fitted with turbochargers expanded up to 2,000 horsepower. Racers learned from the sled pulling competitions and began boosting truck engines in similar ways.
“That opened the door for people to start tinkering on them,” Alderson said.
Six liter engines were prone to failure when they were upgraded for higher speeds or heavy loads. Component upgrades such as those done at Kill Devil Diesel changed that. 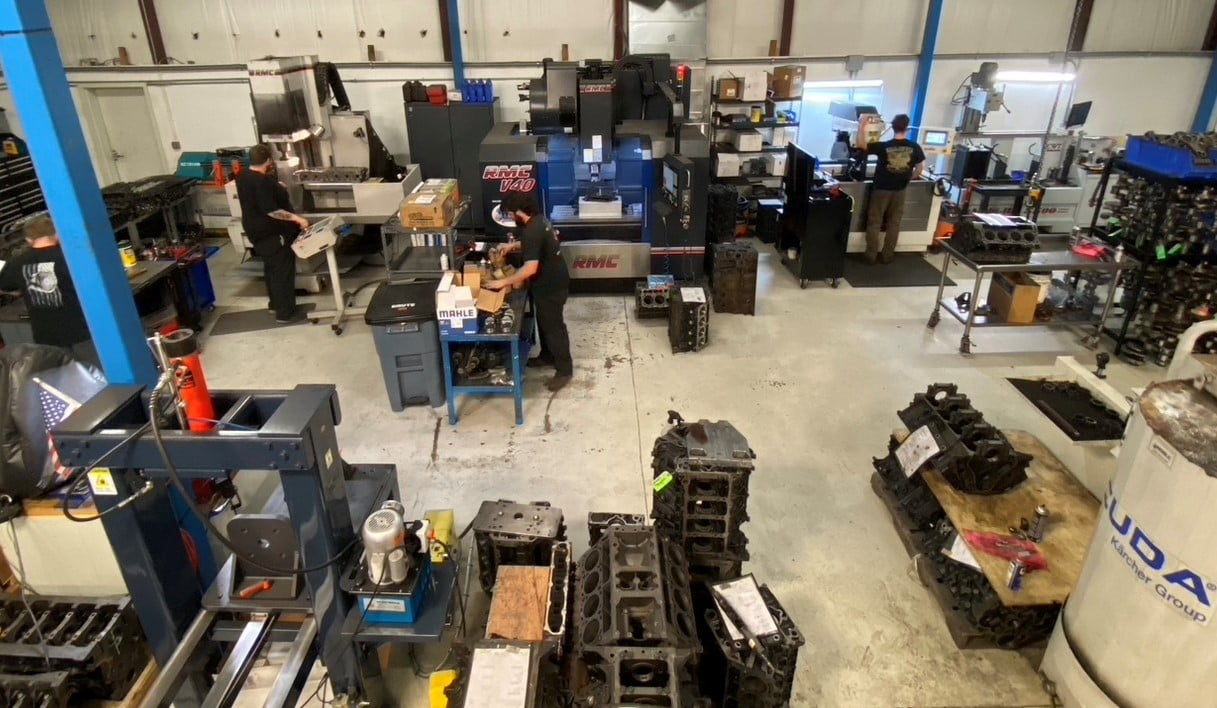 A view of the shop area at Kill Devil Diesel in Poplar Branch, NC. Photo courtesy of Jared Alderson.
The company’s shop is divided into stations where engines in different stages of completion are mounted on stands. First they arrive on pallets already extracted from the truck.
“We are not a repair shop, so we never see the truck,” Alderson said.
Each engine gets a work sheet that details every aspect of the job. Cranes are set in strategic spots for lifting heavy blocks and other equipment.
The engine goes to an area where it is taken apart, piece by piece down to the block which is then thoroughly cleaned in a self-contained case.
The block is machined to precise dimensions needed for the power enhancement requested by the customer. In most cases, computer operated machines do the work down to sizes that are fractions of a hair width. 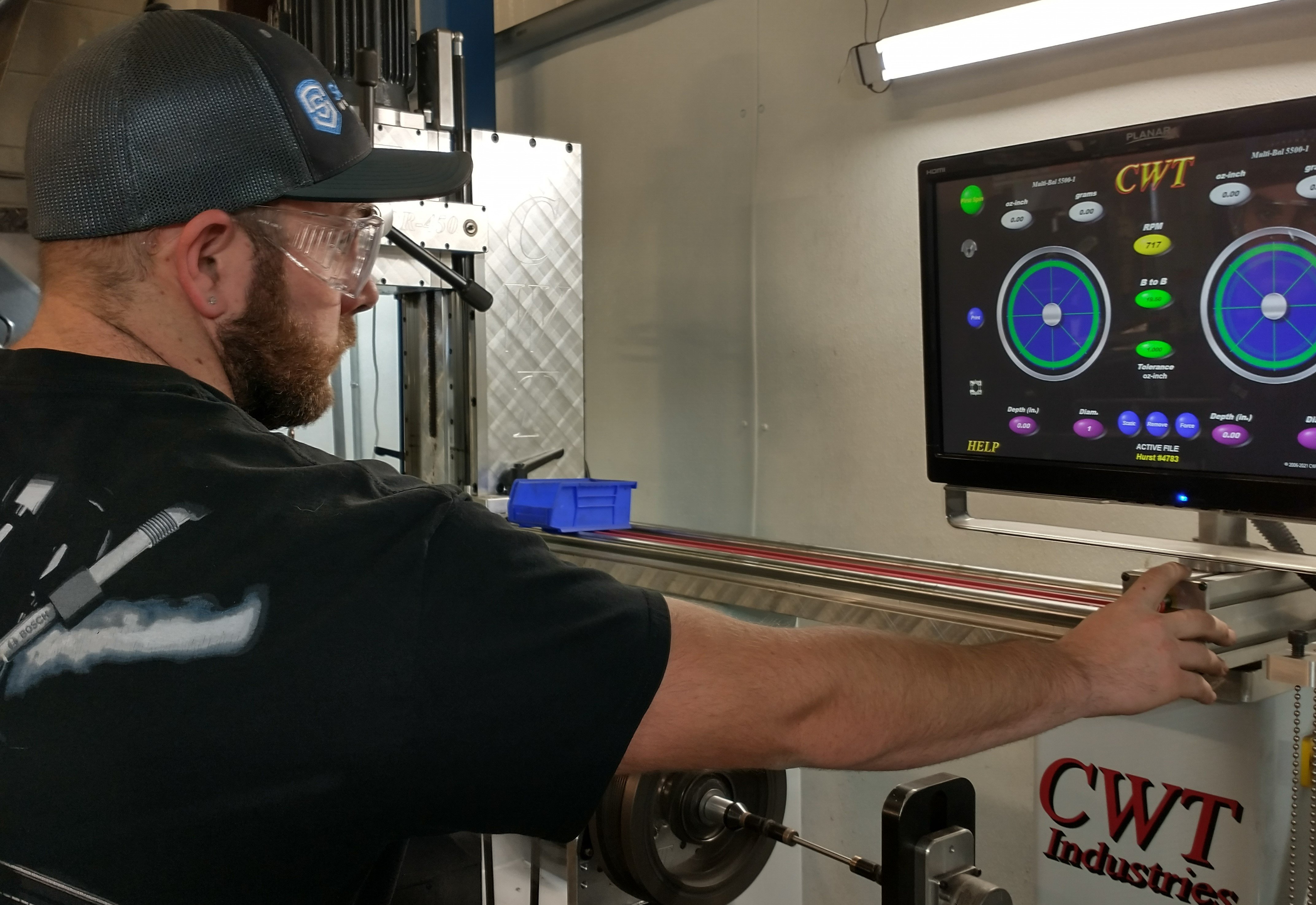 Kill Devil Diesel's Andy Baldwin balances a crankshaft.
The job typically includes new parts such as Kill Devil Diesel’s exclusive aluminum cylinder heads. The company sells or installs everything a high-performance engine needs including injectors, pistons, rings, exhaust manifolds, turbos and connecting rods, among others.
A completed 6.0 liter engine goes for $9,975. A pair of heads costs $2,300.
Most of the company’s work is with 6.0 liter and 6.4 liter “Powerstroke” engines made by Ford. They also remanufacture other engines including the 6.7 and 7.3 liter sizes, the Cummins used in Dodge trucks and the Duramax from Chevrolet.
Engine parts are shipped all over the world and to all 50 states. They work with about 300 dealers around the country. Lead time to get a completed remanufactured engine is about six months, in part because of supply chain problems, Alderson said.
The shop stays constantly busy.
Recently, Parker Hatcher, was doing a valve job on an engine from the fastest four-wheel drive diesel truck in the world owned by Rudy’s Performance Parts in Burlington, N.C. Hatcher deftly maneuvered the valve seat guide machine using a controller much like a steering wheel. 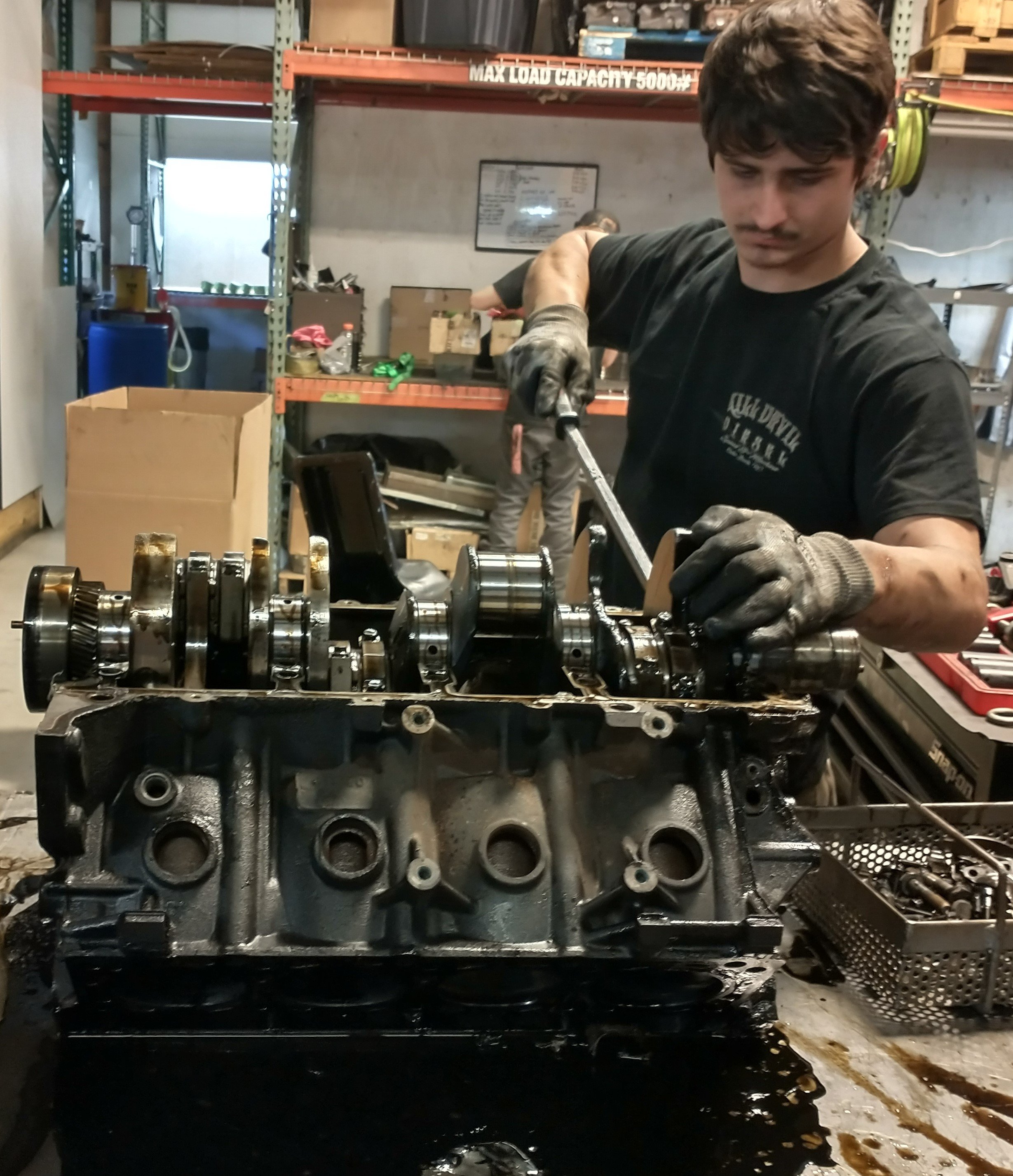 Kill Devil Diesel's Nathan Williams dismantles an engine.
In another area of the shop, Nathan Williams used a long pry bar to move the crankshaft into the right position as he dismantled an engine. Grease stained his hands and oily parts lay in proximity of his work.
“There’s no glamorous way to tear down a diesel engine,” Alderson said.
Andy Baldwin worked on balancing a crankshaft precisely measured by a computer. As the crankshaft turned, Baldwin closely watched the numbers displayed on the screen in front of him.
When finished, the completed, gleaming engines are placed on a machine where they are connected to an electric motor for a trial run. The test ensures there are no leaks, knocks or ticks and that the oil pressure and compression are right. If all is well, it is packed up and placed on a pallet for shipping.
The diesel industry faces some challenges.
Black smoke flowing from truck exhausts called “rolling coal” has attracted scrutiny from the Environmental Protection Agency.
The EPA has cited companies for making after-market products called “emissions defeat devices” used on street trucks. But there are concerns that regulations could expand or be interpreted in a way that could also restrict legal racing.
Several automotive associations successfully lobbied for a bill called Recognizing the Protection of Motorsports Act, first introduced in 2019. So far it has not passed. North Carolina Sen. Richard Burr is one of the sponsors and reintroduced the bill in 2021.
“The RPM Act does not interfere with the EPA's authority to enforce against individuals who illegally install race parts on vehicles driven on public roads and highways and companies that market such products,” according to the Specialty Equipment Market Association.
In an effort to ensure compliance with federal law, Kill Devil Diesel is currently seeking certification of its cylinder heads in all 50 states. The process costs thousands of dollars and takes months to complete.
The diesel racing industry has become much cleaner since Dennis Anderson first offered him a job 15 years ago.